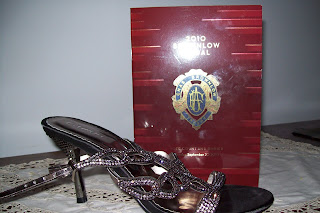 I had a date on Monday night with my son James at Crown Palladium,and what a great night it was for a mother who is a footy tragic..............
No blue carpet for us which was a relief not by careful planning but by virtue of James leaving our tickets in Geelong, so after realising that he had also left his shoes in the car which was now in the carpark deep under Crown, we were fashionably late (6.30 pm).  So as not to make a grand entrance we were taken along with another Geelong ticket forgetter, via the top floor lifts , via the Mahogony Room back to the Palladium where the boys had to have there identity verified .  The chick at the door who had clearly left her smiley face at home then gave us the wrong table number which left James and I standing in a sea of sitting people, and yes l had my high heels on and every Tom ,Dick and Harry was chatting to James on the way through.
Then it happened, OMG we were sitting right up the front next to the stage, surrounded by the Collingwood table, Carlton table and Freo table.  Now my confidence was taking a bit of a beating as the comments were being made "oh James thats lovely you've brought your mum"  little did they know that as a child l brainwashed James with tapes at night " if you ever play AFL you will take your mum to the Brownlow"
We finally made it to our table, but Gaz and Loz hadnt made there entrance yet so we were not caught up in the media throng following them.
I was starving, but you can guarantee that there was plenty of spare plates on our table as the girls eat like sparrows.  The food was okay, your glass never empty and there was always someone to talk to, not to mention all of the behind the scenes laughs that went on.
It is really a night for the girls  or WAGS as they say , the night must boost the cosmetic industry sales by a least 100%, it was awesome to see the dresses.
My dress was perfect for the night  and there were no malfunctions,  the shoes really comfortable at one stage l though it would be easier to put my foot up on the table so my shoes could be displayed as they were getting a lot of attention.  (Thanks to Di from Peach Illusion  in Gisborne).
The other good thing was that you are totally oblivious to the cameras, there was that much going on, at one stage l said to Nadia (Jimmys girlfriend) can you move your seat away from me, the problem was she could hardly move as her dress(which was stunning ) was so fitted and heavy that she could hardly move.
Oh to be young and that thin again...........Not..................
I had a ball  and will be ever grateful to James for asking his mum.........
Cheers Mary
Posted by The Drapers of Mt Macedon at 10:53 AM